If it seems like you keep hearing about mortgage rates hitting yet another record low, that's because you are. The 30-year mortgage rate just hit its eighth record low so far this year.

The average interest rate on a 30-year fixed-rate mortgage fell to a record low of 2.88% this past week, according to Freddie Mac. That's the lowest level in the nearly 50 years of the mortgage giant's survey. The 15-year fixed-rate mortgage dropped to 2.44%.
The low rates give potential home buyers more purchasing power and should strengthen demand in the real estate market, Freddie Mac said.
"We expect rates to stay low and continue to propel the purchase market forward," said Sam Khater, Freddie Mac's chief economist. "However, the main barrier to rising demand remains the lack of inventory, especially for entry-level homes."
The number of homes for sale has fallen to some of the lowest levels on record, said George Ratiu, Realtor.com's senior economist. This has led to a frenzied environment of multiple bids, price escalation clauses and inspection waivers.
"Historically-low mortgage rates are stoking demand for real estate, as buyers are rushing to lock-in low monthly payments," he said. "Sellers remain wary to list and are often buyers themselves for their next home, so they continue to struggle with the same limited supply."
Prospective home buyers are also facing tightened lending standards, said Ratiu.
"At this pace, tighter lending standards and low inventory will squeeze housing activity and we will see a substantial slowdown in sales in the second half of this year," he said.
Open in Gallery 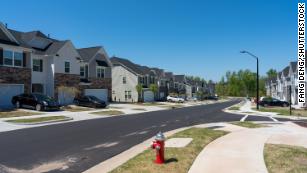 Mortgage rates are at record lows. Is now the time to refinance?
Although refinance and purchase applications decreased last week, both are considerably higher than a year ago, according to the Mortgage Bankers Association. Refinances are up by 84% over last year and purchase applications are 22% higher than they were last year.
The MBA expects rates to remain at these low levels, spurring strong refinance activity and offering homeowners some relief during these uncertain economic times with lower monthly mortgage payments, said Joel Kan, MBA's associate vice president of economic and industry forecasting.
But he noted that loan balances are going up.
"Purchase loan balances continued to climb, which is perhaps a sign that the still-weak job market and tighter credit for government loans are constraining some first-time homebuyers."
Credit: www.cnn.com

See how Home Key Realty can help with your real estate needs!

Are you sure you want to delete this?